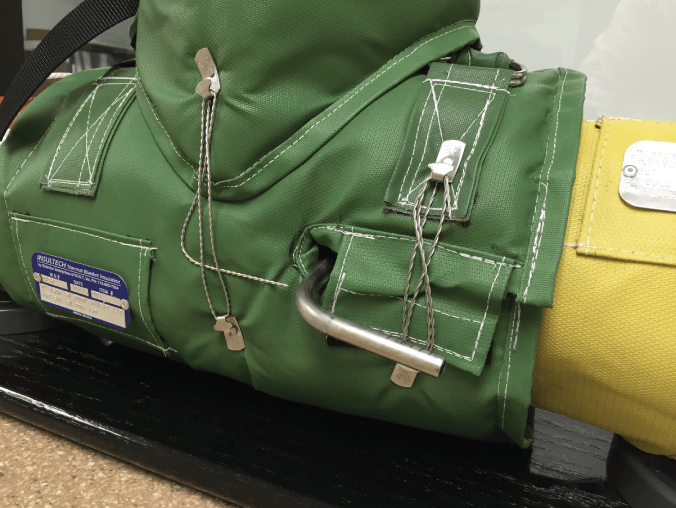 “You take a steam pipe, you put that on your fitting, and the steam heats up to keep the fitting from freezing – it’s that simple,” said Joe Lauria, chief operations officer for Shannon.

An electric heat tracing operates very similarly to a steam heat tracing, noted Lauria, except the facility owner would replace the steam piping on a steam heat trace kit with electrical wiring, which generates the heat. Regardless of which system a facility chooses, Shannon can not only supply custom-made heat trace kits but also fully insulate the elements with reusable insulation blankets. Why use a reusable blanket to insulate a system that’s already delivering heat? First, the Shannon blanket protects workers from burning themselves on a heat tracing, and, second, the blanket allows it to operate at maximum efficiency.

Facility managers can apply these solutions across industries ranging from power generation and food and beverage to pharmaceuticals and hydrocarbons. Heat trace wiring is critical in parts of the world that regularly see temperatures reach or drop below freezing. Uninsulated valves and pipes without heat tracing risk freezing or even bursting in an extreme cold scenario. That’s why facility owners extensively use heat tracing in the northern latitudes.

In areas of the world that do not regularly see freezing temperatures, like southern Europe and the United States, facility owners are less inclined to invest in heat tracing. Not doing so poses risks like system failures due to an unexpected and extreme weather event. The polar vortex and winter storm in Texas combined to create days of below freezing weather over much of the state. Power-generating plants, natural gas componentry and water pipes failed due to the freezing temperatures.

“They had a cold snap, and their pipes burst. Why? Because they weren’t insulated, and they didn’t have heat tracing,” said Lauria. “If they had had these measures in place, the pipes wouldn’t have burst, and the plants would’ve stayed up and running like GP&L and Bryan Texas Utilities.”

Texas facility managers may have made a decision about heat tracing as part of a cost-benefit analysis based on historical temperature ranges. Climate change has upended that calculus, and facility owners must rethink the cost in terms of the likelihood of the next extreme weather event.

“There’s a cost associated with insulating. Do you embrace the potential payoff (and insurance), or do you take the chance of a system freezing?” said Lauria.

What happened in Texas proves forgoing insulation can bring operations to a standstill, or worse. When it comes to critical business infrastructure, facility managers around the world should assess how they can address (and prepare for) changing climate patterns. Heat-tracing and reusable insulation deliver an outsized return for their cost.