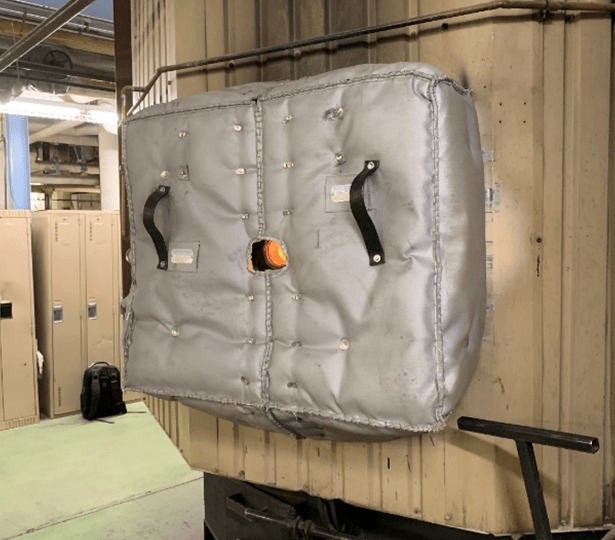 “Each reusable insulation blanket should last at least another 10 years,” says Frank Kovacs, president and CEO of Shannon Global Energy Solutions. “Over the next decade, MRH can expect to save another 30 million pounds of steam.”

An extract of an M&V report on the reusable insulation blankets in place at MRH.

Assuming a monthly savings of 250,000 lbs. of steam based on the first three months after installation, extrapolating a three-month saving over 12 months yields:

The hospital’s staff installed the reusable insulation for MRH’s boiler room, including its main header, instantaneous heater and condensate pumps. Horizon measured and verified the savings using its facility and energy management software program with an audit of its steam system’s energy loss before blanketing the components in 2015. To determine the initial – and ongoing – savings from each reusable insulation blanket, hospital staff analyzed total steam produced from April 2015 to June 2015 and compared that to April 2014 through June 2014 using a weather normalized data analysis for two, different baseline years (i.e., fiscal years 2011-2012 and 2014-2015). The staff then compared the weather-normalized data to the actual steam production after installation (i.e., April – June 2015).

Horizon learned about reusable insulation while researching energy-saving strategies that could deliver a quick payback at a low cost. According to the U.S. Department of Energy, installing “a one-inch thick blanket on an uninsulated six-inch gate valve in a 250-pound-per-square-inch-gauge (psig) saturated steam line yields a savings of $525 per year.” With this and other findings in mind, Horizon contacted Shannon to audit the steam system at MRH.

The audit for of MRH’s system predicted a reusable insulation blanket covering steam system components could save one million pounds of steam annually. For the audit, Shannon traced the steam system and calculated thermal energy loss from MRH’s boiler room among other places. After installing each reusable insulation blanket, hospital staff measured the actual annual cost avoidance in MRH’s boiler room to be nearly three times greater than Shannon’s initial audit.

Alexis Tremblay of Preston Phipps Inc., a Canadian-owned provider of products and services for steam optimization and an exclusive distributor for Shannon, says, “We often hear employers say, ‘We’ve looked at our insulation and are in good shape,’ or ‘We don’t have the funds.’” But Tremblay suggests maintenance and energy managers ask a third party to perform an energy survey and explore the payback from reusable insulation.

“The surveys are often free,” adds Tremblay. “If done correctly, they can address energy costs.’”

Since 1988, Shannon has engineered and manufactured insulation solutions for energy conservation, thermal efficiency, noise reduction and safety. With its CAD-CNC-ERP approach to design and manufacturing, Shannon is the world leader for reusable insulation.